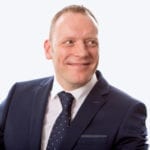 Simon Helliwell, Chartered Legal Executive in our personal injury department has recovered damages in the sum of £100,000.00 for a client who suffered a traumatic brain injury at his local Golf club. The settlement is in addition to recent brain injury claims secured by Simon of £3.3 million pounds and £ ½ million pounds.

Simon’s client in 2017 was an 87 year pensioner who was very independent. He lived alone; drove his own car; and used to go dancing and play golf.

After a round of golf he was searching for a light switch in the club house which was in darkness when he rested his arm against what he thought was a wall but was in fact the door to the cellar which was supposed to be locked. As a result the door opened and he fell into the cellar suffering a traumatic brain injury.

Following the accident the client lost his driving licence due to his brain injury which was devastating for him and it took him some time to come to terms with this. He also had mobility issues.

“I am very much taken back by the outcome as it’s much more than I ever expected. Although it was a lengthy process the outcome was worth the wait and I am thrilled with what I got and for this I am very thankful”.

Thanks to the dedication of Simon, the matter was settled as soon as it could have been. Simon’s communication was exceptional with the best interests of my grandfather at the forefront of his mind. The process and steps that were taken were thoroughly explained. Simon is an absolute credit to the team and is excellent at what he does. As a family we could not be happier about the outcome, this has allowed my grandfather to have some quality of life that he would not have had without the help Simon and his team. It is amazing to see my grandfather back out and living life with some independence and a smile again, we could not be more thankful. Thanks so much Simon

Injuries to the brain can result in catastrophic consequences. Even a moderate brain injury can have significant impact on a victim’s way of life. If someone else is to blame for your injury, it may be possible to make a claim for damages. Our ethos is to make sure we cover every angle in order to maximise your claim to give you future security. The team at Ison Harrison also work closely with case managers and insurers to ensure that your rehabilitation and current and future care needs are at the core of our thinking.

Simon frequently takes over cases from clients who have been dis-satisfied with their solicitors or from firms who have left the personal injury market (an increasing trend). If you have a brain injury claim large or small that you would like to discuss an existing claim that you are pursuing with another solicitor, please contact Simon Helliwell on 0113 2845048 or simon.helliwell@isonharrison.co.uk